Bua started Chicken as Cluck with the vision of bringing the best ingredients to a fast casual favorite, the spicy chicken sandwich. Her organic chicken cover with a range of spicy batters is pressure fried in 100% peanut oil… and it is delicious.

Chicken as Cluck is a delivery-only restaurant that opened for business in 2018. Initially, they tried both Homebase and 7Shift for scheduling and time & attendance but in 2019 they switch to Zira for both and never looked back

Chicken as Cluck’s owner, Bua V., needed a solution that her diverse workforce could pick up without training. She was tired of looking up PIN numbers for staff that had forgotten theirs.

“Everything from updating missed clock outs, to just creating a simple schedule was a struggle with our other systems”, Bua V.

Language & Tech Barriers: A few members of the Chicken as Cluck team only spoke spanish and others still used flip phones, so Bua wanted to make sure whatever she chose was easy to use.

Profit Forecasting: Bua wanted to know exactly how much she was spending on labor, and also wanted a clear idea of how much she would be spending in the weeks ahead.

With existing “labor optimization” tools she was seeing fluctuations of more that 50%, making it nearly impossible to consistent turn a profit.

When Bua first created her Zira account she imported her existing schedule and then downloaded the Zira Portal app on her iPad. She left it next to her 7Punches Time Clock by 7Shifts that was her current time & attendance solution.

Her plan was to tell the team about the new Zira system at some point during the week and transition over to Zira after the week was over.

However, when her employees got to the store before her, they saw their shifts and profiles automatically popping up on the Zira Portal and started clocking in on Zira right away.

As Bua describes it, “Clocking in in Zira with Face ID Verification was so easy that the entire team started only clocking in on Zira without even being told about the new system”.

“I love telling this story because this is a great example of how easy to use Zira products are, and when something is that easy to use, it no longer becomes work, it no longer becomes a chore that you need to be told to do, it becomes second nature and easily integrates into your workday. No hassle. No-Fuss”, said Rohan Saini (Zira Founding Engineer).

With the Zira Portal running the show something amazing happened. Attendance neared perfection with show rates of 100% and on-time rates of nearly 95%.

This meant that the schedules she was creating were being executed flawlessly. The ultimate outcome was labor cost forecasting within a fraction of a percent. In an average week, Bua and her growing team see labor cost less than 0.15% off when compared to projected totals.

Chicken as Cluck had a small but mighty team. Still communication issues plague them when real-time changes needed to happen.

Join the growing ranks of companies outperforming their expectations. 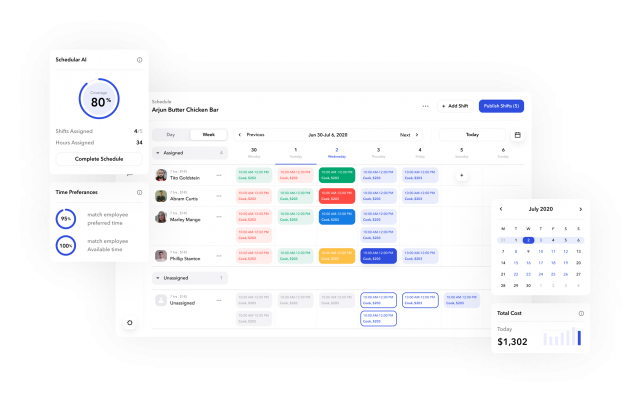